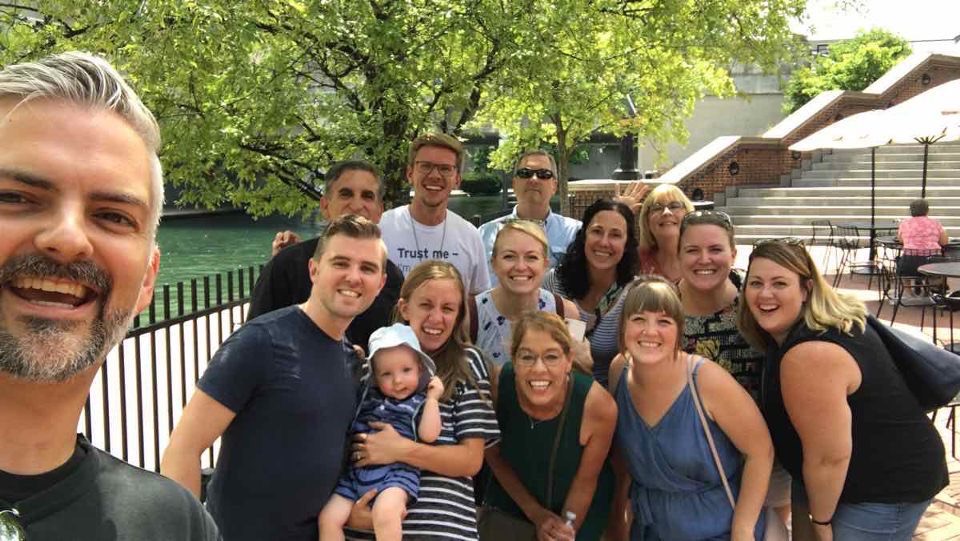 Emily has been on staff since 2010. She spent a year in South Asia and has since been in Indianapolis serving on multiple campuses. She helps lead the Indy Metro Cru team with Ryan. She is married to James and they have 2 daughters, Hannah and Ellie.

Ryan helps give direction to Indy Metro Cru staff and students alongside Emily. He has served on staff at Purdue University, in Berlin, Germany, and now in Indianapolis. He and his wife Laura have 3 daughters: twins Elle and Reese, and Evie.

Jeff and Susie have been on staff for MANY years (since the 80s 🙂 and LOVE college students! They live in the “Cru House” near Butler’s campus and have 2 daughters.

Stephen has been on staff since 2010 and Kelsey since 2015. They serve with Indy Metro Cru at IUPUI and Stephen also serves with Creative One Media at the Cru Indianapolis Office in Westfield, IN.

Kailene has been on staff since 2013 in Boise, ID, then Moscow, Russia, and now with the Indy Metro team since 2015. Her husband, Aaron, is also on staff with Cru Music.

Kelly has served with Cru since 1996 and she loves investing in the lives of college students. She serves on the Indy Metro team at Butler University.  Kelly is married to her husband Mike and has four sons, Isaac, Alex, Nixon and Jensen.

Melissa has been on staff with Cru since 2012. She started her staff career at her alma mater, Purdue University. She and her husband, Griff, moved to Indianapolis in 2018 and she now has the privilege of working with students at IUPUI. In addition to being on campus, she spends time at home with her kids (2 daughters and a baby boy coming October ’22).

Joselyn has been on staff since 2012. She has served on staff at Indiana University, Cru Headquarters in Orlando, FL, and now Indianapolis.

Jenny and John are our team’s faculty specialists.  Having served in Atlanta, Syracuse, Knoxville, Philadelphia, Orlando, and now Indianapolis, they have extensive experience in campus and community outreach.  Both of them have studied and taught at the graduate level and so understand the challenges of academia from the inside.  They love the gospel and count it a privilege to be a part of the Indy Metro Team.

David has been on staff since 2016 when he graduated from Indiana University. Before joining the Indy Metro team, he served part-time with Cru at IU while working in coffee.

An unorthodox intern, completing his undergraduate and graduate degrees in ministry at Indiana Wesleyan University where he had no connection to Cru. Matt is returning for a second year of interning with the Indy Metro team.

Jenna has worked with Cru since she graduated in 2018, first as an intern at UIndy and IUPUI, and currently as long-term staff at Butler. Willard has also worked with Cru since 2018 and is a graphic designer on the Creative One Media team. They have a sweet, wild toddler named Henry who keeps them on their toes!

Brooke has been on staff since 2017. She started her staff life at her alma mater, Ball State, before moving to Indianapolis where she now serves on the Indy Metro team, primarily at IUPUI. She is married to Jake, who is in medical school at Marian University.

Rachael and Kyle joined staff in 2014 and spent their first 6 years serving on the Cleveland Metro team before moving to Indiana in 2019 for Kyle’s new role on the Indy Innovation team.  Rachael’s current ministry is at IUPUI, serving alongside students. They have a daughter, Adelynn, and son, Lucas, on the way and are thrilled their family is growing!

Cholas (sometimes called Nick) and Nichole started their Cru staff journey in 2019. While Nichole’s involvement with Cru started at Ball State, Cholas’ Cru background started at IUPUI in 2013. They both have enjoyed getting to meet people from many different backgrounds on campus, and are looking forward to continuing to serve. Cholas serves on campus at IUPUI and Nichole serves on the Summer Mission Finance team, sending people all over the world.